This year’s Gold Medal Plates Winning Chefs from Edmonton, Calgary and Vancouver has the spotlight.
Chefs Paul Shufelt (Edmonton) – Duncan Ly  (Calgary) – Brian Skinner (Vancouver).
Then its James Nevison and his 2014 edition of Had a Glass. Top 100 wines under $20.
It’s quite possible Benjamin Bridge may have made one of the  best bottles of  bubble in Canada.
Owner Gerry McConnell and Wine Consultant Peter Gamble visit
Daenna –The Wine  Diva joins me for a round table discussion with Ed Flaherty Chief Winemaker for Tarapaca in Chile.
Great wines at unbelievable prices.

Gold Medal Plates is the ultimate celebration of Canadian Excellence in cuisine, wine, the arts and athletic achievement. Celebrated in eleven cities across Canada in 2013, Gold Medal Plates features the premier chefs in each city in a competition to crown a gold, silver and bronze medal culinary team in each city, and subsequently nation-wide at the Canadian Championships in Kelowna BC in February 7th and 8th.
http://goldmedalplates.com
Chef Brian Skinner of The Acorn in Vancouver, BC proved his culinary prowess  taking home the gold award at the Victoria 2013 Gold Medal Plates competition held at the Victoria Conference Centre. 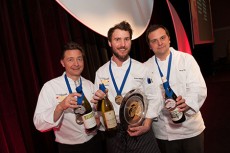 Brian  went head-to-head with 10 of British Columbia’s finest culinary masters at the prestigious culinary competition and will go on to compete at the Canadian Culinary Championships, the Gold Medal Plates Finale, in Kelowna on February 7th and 8th, 2014. Brian Skinner wowed the judges with a dish of smoked king oyster mushroom, braised shallot, carrot, and mushroom jus, which was paired with 2009 Clos du Soleil Grower’s Series Chegwin & Baessler Pinot Blanc.
www.theacornrestaurant.ca 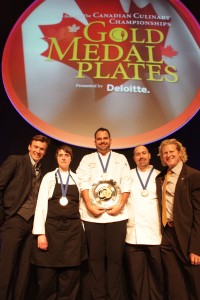 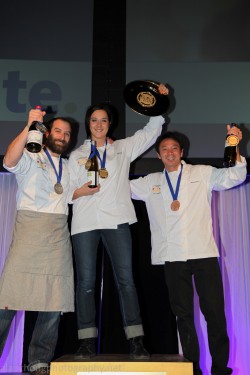 He is now a three-time medalist having previously won bronze in 2012 and gold in 2010 at Gold Medal Plates.
Duncan took the gold medal with the Vietnamese style braised pork neck, pig’s ear and side stripe prawn terrine with confit baby squid, Asian hot mustard & garlic sauce. This was paired with a Peller Estates Ice Cuvee Rose from the Peller Estates winery in Ontario.
www.yellowdoorbistro.ca
[divider]
James Nevison _ Had a Glass 2014 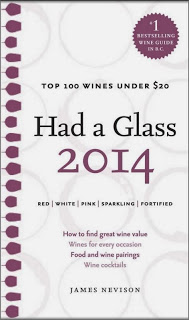 Tasted and tested – 100 wines that offer you the very  best value for money across the best whites, pinks, reds and bubbles for 2013.
In addition to its 100 wallet-friendly wines, Had A Glass also has a wine “bootcamp” section that covers all the basics of wine appreciation, including:
• How to taste wine (as opposed to simply drink wine!): James’s patented Four Step Process explains what to look for in a wine’s colour, clarity, aroma and bouquet, and how to understand a wine’s body and finish.
• How to buy wine: Advice on how to navigate the wine aisles, along with tips on how to seek out value in the liquor store.
• How to enjoy wine: The various accoutrements available to wine enthusiasts, with info on serving temperatures and a quick-reference serving temperature chart.
• Food and Wine: A handy rundown of food and wine pairings covering all the major food groups.
We welcome back James Nevison.
http://www.randomhouse.com/book/222500/had-a-glass-2013-by-james-nevison
[divider]
Benjamin Bridge 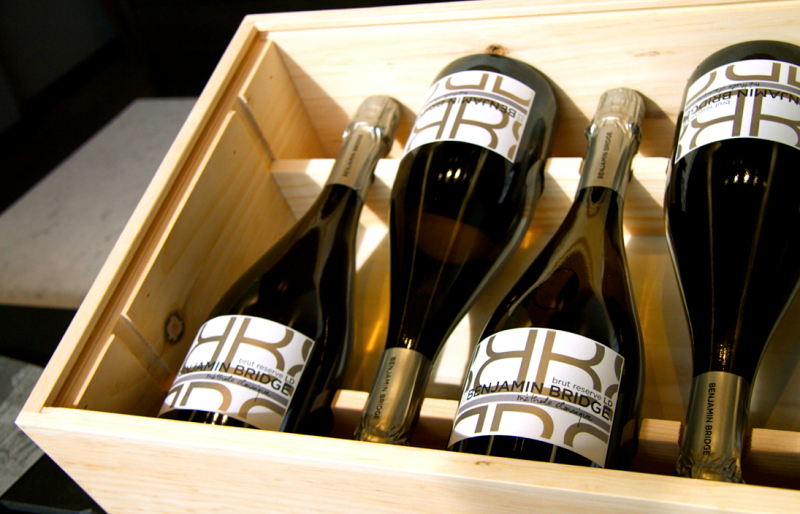 In little more than a decade, Benjamin Bridge has distinguished itself by its dedication to time proven techniques, expert guidance, and most importantly its acclaimed, distinctive wines.
The Benjamin Bridge vineyards are located in the heart of the Gaspereau Valley on the Bay of Fundy, where the cool climate bears an uncanny affinity with the Champagne region of France.
Their experienced winemakers work in collaboration with international experts to produce world-class Méthode Classique sparkling wines and limited edition luxury wines.
The winery needed a lot of cash and serious winemaking talents.
The money guy with the passion is Gerry McConnell..who along with his late wife Dara,  bought 60 acres in 1999.
Longtime lovers of fine food and wine, the couple were inspired by a  tour of South African vineyards, and dreamed of creating world-class wines in their native Canada.
Gerry then hired renowned wine consultant Peter Gamble. (Ravine. Stratus. Versato in Argentina), then came champagne specialist
RAPHAËL BRISBOIS Sparkling Wine Consultant and finally in 2008 JEAN-BENOIT DESLAURIERS Winemaker.
Our guests then are Peter Gamble and Gerry McConnell.
THIS is an amazing success story!! 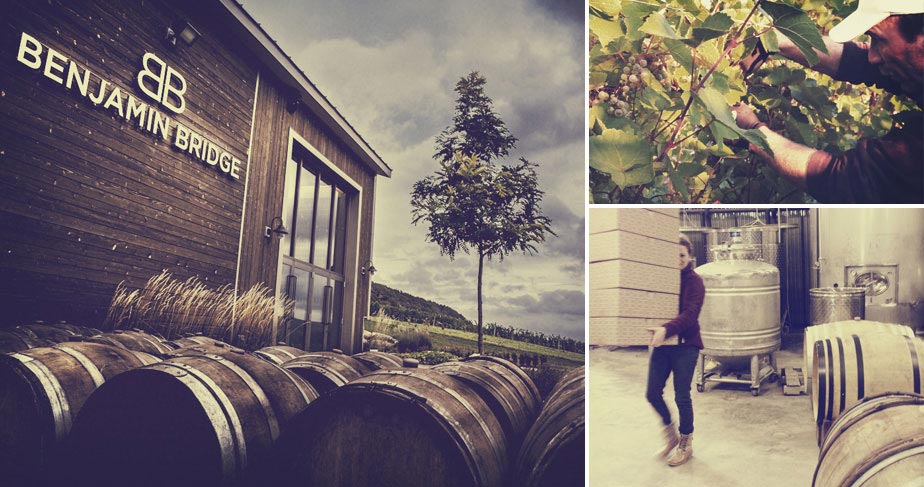 [divider]
Ed Flaherty – Chief Winemaker at  Vina Tarapaca Wines  Chile.
Ed first came to Chile in 1993 to work a harvest, and he and his wife Jen never left. 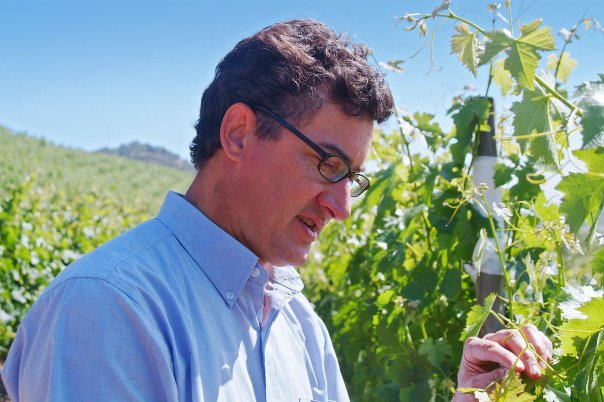 The country has an exceptional climate for wine growing,  producing ripe fruit with good acidity and intense flavors. Chile also has some of the best whitewater kayaking in the world, which had more than a little to do with his  decision to stay.
Over the years, Ed has worked with some of the top wineries in the Chilean industry, including Cono Sur, Errázuriz, and now Viña Tarapacá.
He also now makes his own wines called Flaherty!!
Daenna van Mulligen and I were invited to West in Vancouver to dine and taste his latest releases from Vina Tarapaca.
They are truly wonderful wines but the best thing about them is the price.
Most come in well under $20.
Not bad for a winery 135 years old. http://tarapaca.cl
[divider]