A Four Stop Stroll through Saanich :

Saanich is that gorgeous stretch of farmland on the drive from the BC Ferry
Docks in Schwartz Bay, Vancouver Island  into Victoria.

The idea for the show was suggested by Corey Wood, transplanted Albertan.

He kept reminding me that he was surrounded by growers,  farmers, and
artisans who should be recognized. 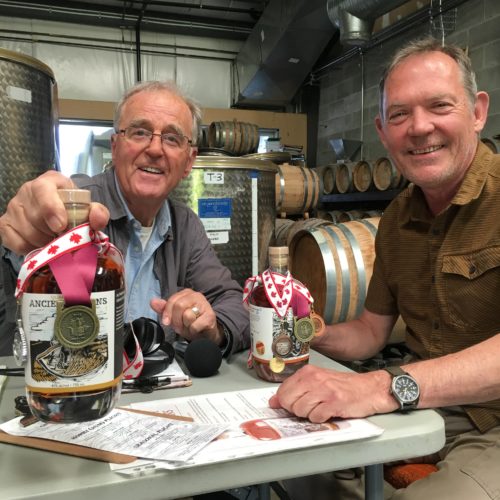 Devine was created by John and Cathy Windsor in 2007 out of a 25-acre piece
of land located in Saanichton on the Saanich Peninsula land. Originally a
grape farm supplying organic grapes to local wineries, the decision was soon
made to open an onsite winery and experiment with various types of grape
varietals to see which ones would thrive.

Early grape varieties included:
Pinot Gris and Noir, along with the Austrian white grape Gruner Veltliner.
The winery has since diversified to include other varietals over the years.
The first vintage was produced in 2009, and today, the farm produces over
2000 cases of wine 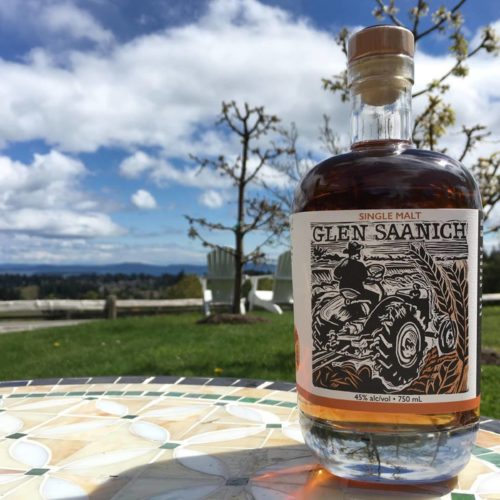 Distiller Ken Winchester has been experimenting with turning grapes into a
base spirit for gin and other spirits over the last couple of years. His
philosophy is focused on being a local winery and distillery, using
Vancouver Island ingredients first and wherever possible. The winery’s
grapes are now all grown locally making De Vine’s gins among the few using
island grown ingredients for their base spirit.
.

Ken Winchester has been a winemaker and distiller for more than 20 years.
Ken studied winemaking at the University of California, then planted
Winchester Vineyards in Paso Robles, California. Back in Canada, Ken
produced award-winning Pinot Noirs, consulted for other Island wineries, was
the first winemaker at Church and State and even came up with the name and
taught viticulture at UBC.

He studied distilling at Michigan State and
apprenticed at Bruichladdich Distillery in Scotland. In 2007 Ken launched
Winchester Spirits, the first distillery on Vancouver Island, and created
the iconic Victoria Gin. Ken has consulted for deVine since its first
plantings, and became its Winemaker & Distiller. deVine produces
terroir-driven, organic spirits including Gins, Whisky, fruit Brandies, and
Rum.

The great thing about the distillery is it doesn’t  have to pay the bills at
deVine. They  have a successful winery that makes 2,000 cases a year.

We found Ken at deVine is his cellar and barrel room..completely surrounded
by the implements of his craft.

We even had time to talk about his wines as well.

FYI – on this home page you’ll find a video companion to this conversation –
shot & edited  by..wait for it ..Corey Wood

This wonderful vineyard was the dream of former owner Kim Pullen.

Kim was always pushing the wine boundaries in BC. 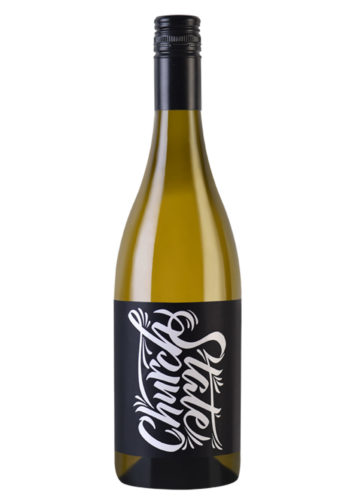 Being one of the first to locate the winery in Saanich but then bringing his
grapes from the Okanagan.

Rather than bringing Okanagan grapes to a Vancouver Island winery, in 2008,
Church & State owner Kim Pullen opened a second crush facility in a leased
packing house in the south Okanagan. A second tasting room opened in 2010 on
the winery’s Coyote Bowl Vineyard on Black Sage Road.

Even though I much preferred the original labels..the wine inside is still
classy and very well made.

The surprise is how great the winery and restaurant are as a destination.

I was originally going to be talking to GM Tony Buree but his dentist had
the final say and thus Danica was kind enough to step in front of the
microphone and take his place. 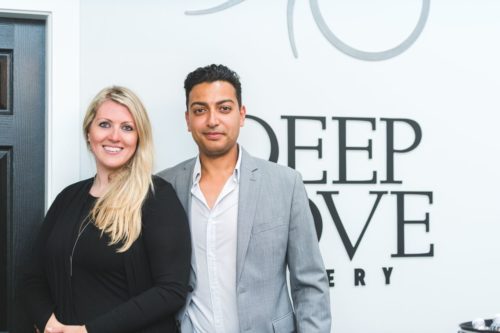 This is quite a story..

The original winery was called Muse. 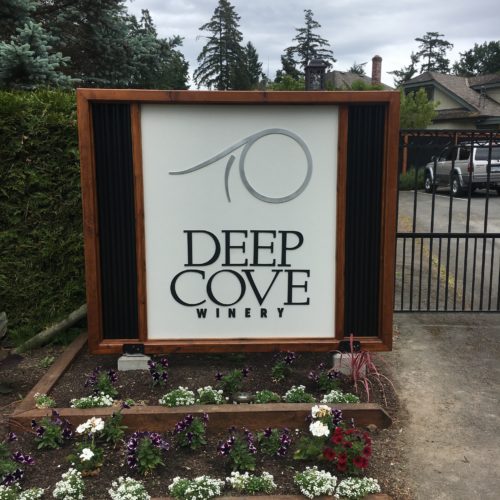 A wonderful young couple,  Elyse and Tasem Ramadan decided to change their
careers and take over this beautiful little winery.  It’s the closest to the
Ferry terminal and right across the street from the iconic Deep Cove Chalet.

The winery has been completely rebuilt and made into a destination for
weddings, meetings and tastings.

The second change? The wines had to be much better and that’s where they
made a wise decision and hired winemaker and consultant Pascal Madevon
(Osoyoos Larose. Culmina)

WoW!  I’m impressed.  With the wines, the winery and the dedication shown by
Tasem and Elyse. 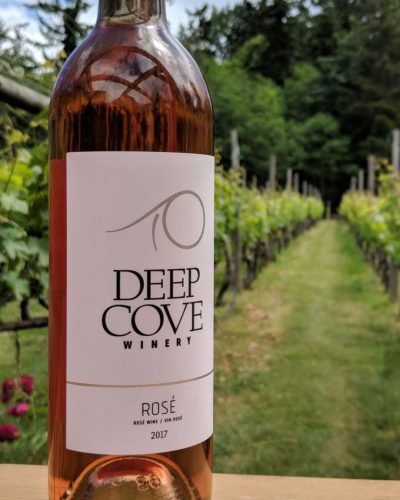 Right out of the June 1st starting gate, this is a winery that could affect
wines made in  Saanich into the future.

But..and it’s a BIG BUT they don’t make very much wine.  Have a listen to
the amounts available.

Pascal Madevon was saying he hadn’t worked with  Foch since France.

This story was a really nice surprise.  You can find it and them in North
Saanich. 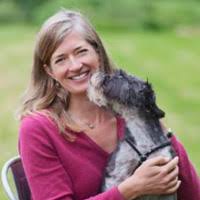 Kristen  credits her father Jim for first planting the orchard bug in her
when she was a teenager.

Then , like most teens, she took off to see the World.

Kristen decided  to return to the idea 16 years ago. It took her five years
just to set up the operation before she bottled her first batch of cider.
She took a huge risk early on – planting more than 1,300 trees of “inedible”
apples in her orchard. 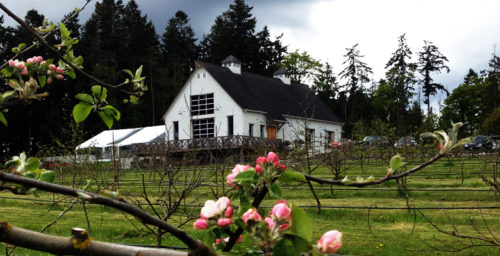 How difficult is Cider making?  Check this out.

“‘Bittersweet’ is a traditional English-style cider. It is made from
Dabinetts and Yarlington Mills apples, and a few other varieties, that are
really unheard of.  They are basically inedible, and you can’t buy them. And
yet, if you are going to make a truly traditional, English-style cider in
North America, you really have to grow those apples yourself.”

Sea Cider is not just a Saanich/Vancouver island success story. Through its
amazing growth and award winning ciders, it has become one of the very best
Canadian success stories. Period. 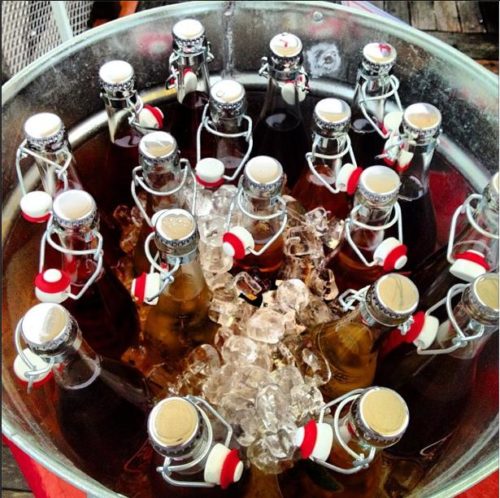 I’m more than pleased to sit back and let Kristen tell the story. They all
should be this good!

If you’re looking for the nuances of cider..this is the interview for you.

Many of us grew up drinking a horrible sweet juice that was passed off a “a
cider”. THIS is cider the way it was meant to be.  It’s not for everyone but
neither is wine or beer or cocktails.

If you’re making plans to come to Vancouver Island consider spending a day
in Saanich with deVine, Church and State, Deep Cove and Sea Cider.

The 16th BC Shellfish festival.  Courtney-Comox

In conversation about BC’s fishery and their menus PLUS a very special
segment on memories of Anthony Bourdain from friends Tojo, Ned Bell, Pino
Posteraro, Quang Dang, etc.