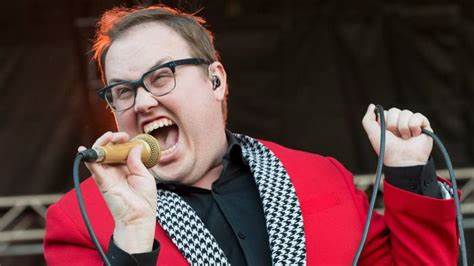 Does anyone remember the moment a couple of years ago at the Edmonton Folk Fest when Paul Janeway left the Broken Bones blasting on stage and took his microphone into the audience and walked halfway up the hill?

He’d still be going but the mic stopped working.

It’s the kind of thing a firebrand preacher might do. That’s part of Paul’s childhood in Alabama.

He didn’t hear any popular music on the radio until his late teens because he and his family only listened to gospel stations.

We talk about the Edmonton Folk Fest, finding his voice, Paul talks about Oasis Pizza. That’s the routine they go through backstage just before they go on.

He talks about how he transforms into St Paul as he walks out to the mic and also fills us in on his best friend and co-founder/bassist  Jessie Philips.  Jessie’s hometown isn’t Birmingham, Alabama. It’s Fernie, BC.

Paul also proudly brings their new album  The Alien Coast. That’s where they all live – on The Gulf of Mexico coastline. Early explorers called it The Alien Coastline.

It’s not exactly the same R&B band you may have fallen for.  The groove is still there but the lyrics reference classic art and painters, dream state content, etc.

All this plus 2 hours of hand-picked tunes.

The complete Interview with Paul Janeway – with tracks – can be heard on the Mulligan Stew Podcast. Also available on video. Details at www.mulliganstew.ca