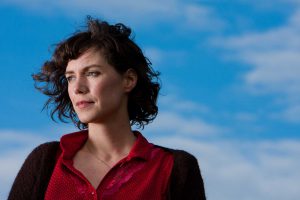 Biography
Silhouette is the highly anticipated new album from Catherine MacLellan. The record captures her best qualities effortlessly—stitching together elegantly woven songs with her memorable blend of heartfelt and powerfully introspective lyrics and catchy melodies.
Recorded largely at a secluded cabin in rural Prince Edward Island, MacLellan brought together a band of longtime friends and musical collaborators with producer David Baxter to craft the 14-track album that Canada’s Exclaim! Magazine has touted as being “a near-hour-long album devoid of filler…a testimony to MacLellan’s ascent to greatness.” Indeed, the subtle yet steadfast strength of the album is undoubtedly the understated power of MacLellan’s songwriting and performance on the largely acoustic-driven songs.
Her sweet tones weft gracefully throughout pensive and internalized lyrics that ponder, in the most elegant terms, the most relatable of internal dilemmas—balancing work and family, love blooming and fading away, and evaluating one’s own personal strength. Throughout the 14 tracks on Silhouette, it’s felt that you’re listening to the voice of an every-woman with a gift for expressing with poise the most personal of internal conflicts.
A particularly sweet note on Silhoutette hits on the penultimate track “Snowbird”, a stripped down cover version the most lauded song ever written by her father Gene MacLellan, featuring Canadian icon Jim Cuddy (of Blue Rodeo). It’s a meaningful acoustic tribute to the elder MacLellan’s songwriting legacy, and fan favourite re-imagined by Catherine in a whole new light.
MacLellan’s star has long been rising in North America. Voted Critics Favourite New Discovery by Penguin EggsMagazine in 2008, her last record Water In The Groundreached out to expand her already loyal fan base as she toured in support of legendary artists including Bruce Cockburn in the United States and Steve Forbert in the UK, while also holding her own by showcasing in Boston, Berlin, Cannes, Memphis, New York, London, and Paris.
Her previous albums have collectively hit #1 on the iTunes Canada Roots charts, and been acclaimed by tastemakers atMaverick Magazine, fRoots, The Austin Chronicle, and Boston Globe.
Like the person in the room who demonstrates his or her commanding presence without announcing their arrival, Catherine MacLellan’s fine songwriting talent and accomplished performance draws her listeners in with little effort, and without need of any persuasion. Silhouette is a reminder that Catherine’s musicianship is unparalleled among performers of her generation.
Highlights
Winner at the 2010 East Coast Music Awards: