He lead an amazing life..

From a family in the deep south that grew cotton.  Sam would work in the fields with African American pickers. They brought their songs with them and Sam grew to love the music.

He worked his way through radio and played a mix of black and white music that he loved.

When he started Sun Records in Memphis..it made perfect sense that he would record Jr Parker, Howling Wolf, and Charlie Rich side-by-side.

Then he went looking for a white singer who shared his love of black music and found him in ELVIS.

So years later, I find myself at the opening of the Rock Hall of Fame in Cleveland in 1995. Sam Phillips is being inducted and comes into the press room to speak with journalists and reporters as a group.

“Sam. They have recreated your studio here in the Hall. But how do they recreate the magic, the creative juice that connected in your original rooms? The incredible spark that happened between you and Elvis. How does that get captured here?”

His answer just blew me away… The other voice you hear is Mary Wilson from The Supremes.

The other guest visit is with Colin James and Jeff Healey…many years ago at MuchMusic in Toronto.

Just jamming in the studio. A Jimmy Reed song.  I told the guys I’d give them 5 bucks each if they worked my name into the lyrics.

A Great jam, both guys solo on their acoustic guitars – Five bucks later it’s followed by a giggle.

This was pure magic..still is!

OH…the Podcast is Cheech  and Chong.  Years ago, back in Vancouver where it all started for them.

That’s right – four guests but still a lot of music.

Tracks I  tried to play during fall fundraising but never got played. David Gogo takes us through his latest album Silver Cup. (Produced by Steve)

And they ALL talk about the 2021 Maple Blues Awards nominations. Between them, they have 12!!!! Right at the end of the show I finally find my pal  Roy Forbes who’s doing his first live stream on the Internet Web machine.

Saturday night at the Blue Frog Studios in Whiterock, BC

Have a memorable Saturday Night – Turn it UP Colin found a way to write and record music during the Covid 19 Pandemic.

Gather your music friends and create.

Colin co-wrote and made music with pals Tom Wilson (Toronto) & Colin Linden (Nashville) Both are members of Blackie and the Rodeo Kings and Craig Northey (Vancouver) From Odds.

Colin is a road warrior. The road is his second home.

He’s back on it right now on Vancouver Island and then works his way through to double dates in Alberta. March finds him opening for Buddy Guy in the USA and playing on Austin City Limits.

Check out the Zoom Interview here!

This is the complete interview  – with four tracks from Open Road. 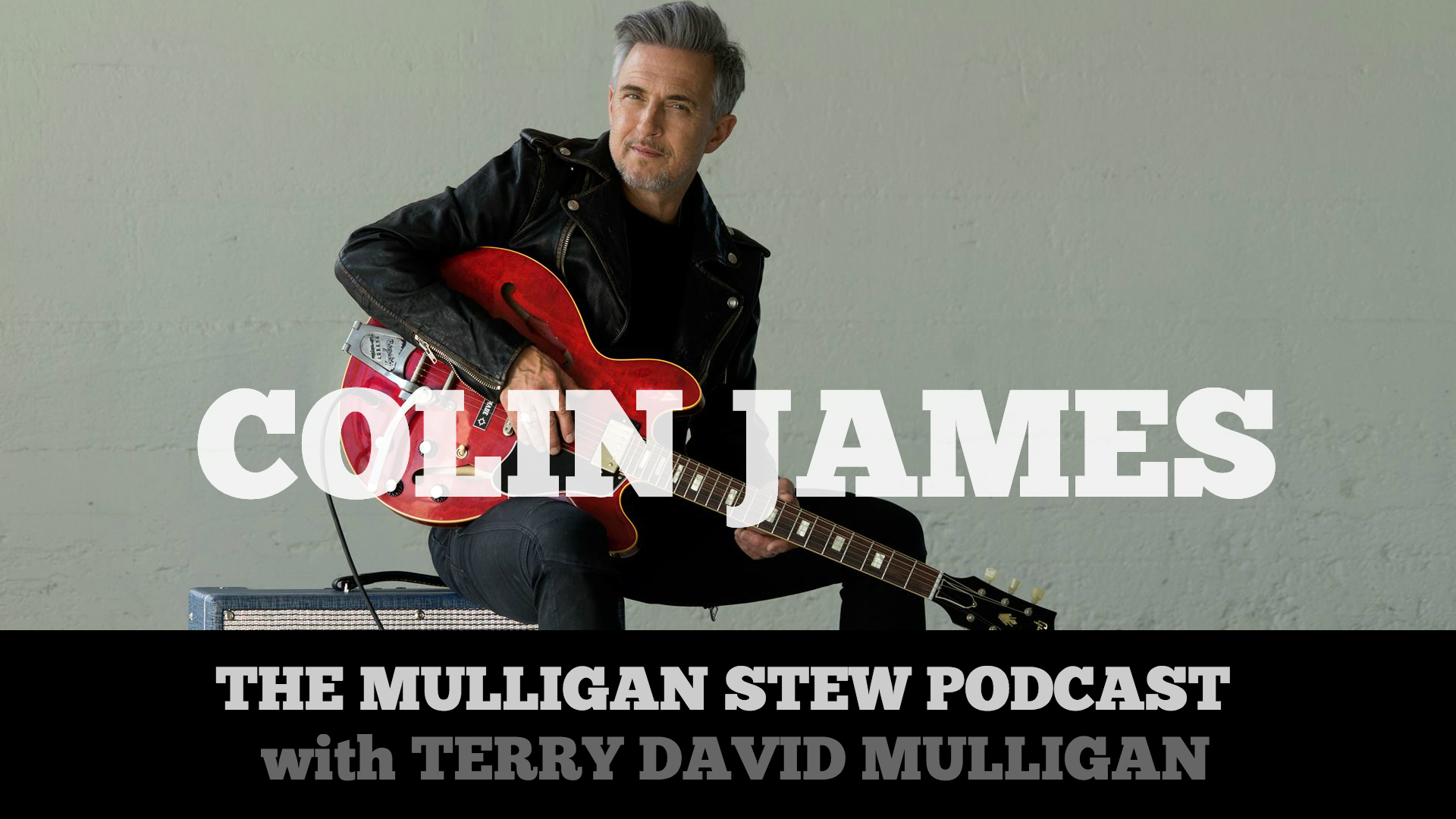 Colin James talks to Terry about his recent JUNO Award win for Blues Album of the Year for his latest record, ‘Miles To Go’. It’s the first time Colin has been recognized with the award in 20 years. Plus, the pair discuss Colin’s collaborations with Blackie and the Rodeo Kings, the early days of his career, and his top 3 favorite blues musicians of all time.

Saturday’s special guest is Colin James.
He’s just pulled off the trifecta
Swept the Blues  Awards
Won best blues album at The Junos
Now touring across Canada
Colin released two blues albums back-to-back.
They were both over the top successes.
We talk about Now What?
Colin plays Calgary March 27 and Edmonton. March 28th

So we play them all.

And a lot more.

Colin is releasing his 19th album called Miles to Go this Friday!

It’s part two of his return to blues tunes.

It started with the highly acclaimed  Blue Highways  in 2016 .

This one is Miles to Go featuring two new songs  – and many,  blues standards.

In the studio with him are Steve Mariner from Monkey Junk, The Sojourners, Colleen Rennison, and piano/co-producer Jesse O’Brien and his great band.

I will remain – written by Colin and 40 light years co-written with Tom Wilson and Jesse O’Brien.

We’ll feature tracks from the album and Colin ‘s interview in Hour Two of The Stew.

And the Mulligan Stew Podcast will have the complete interview.   (Subscribe at Spotify-Google Play Music-Apple Podcasts)

As The Stew hits air 5 Mtn,  its 7 PM in New York and Paul Simon is backstage getting ready to play his farewell concert at Flushing Meadows Corona Park.

“Goodbye Rosie, The Queen of Corona”

He’s come full circle as this was where he started his career over 50 years ago.

At this point, only he knows how the night will play out but it will be memorable..you can bet on it.

So.  in honour of the man and the artist we start with his “ gospel period.”

Loves me like a Rock with the Dixie Hummingbirds.  The President he had in mind was Nixon.

Gone at Last – with Phoebe Snow and the Hummingbirds. (was originally for Bette Midler)

Take me to the Mardi Gras – a song he wrote for the Rev Claude Jeter. Lead singer of the Swan Silvertones.

Thank You Paul Simon.  For the music and the memories.

FYI – The last 30 minutes of The Stew will all be LIVE tracks.

Colin recently signed with True North and he  released his 18th album on Oct 14th titled ‘Blue Highways’
Colin has basically gone back to his roots and is covering his favorite blues tracks, some he’s been playing since he was 15/16.
After his last tour he went straight in the studio and cut 36 songs in 24 hours.
Blue Highways pays tribute to some of the singer/ guitarist’s long time blues idols including Howlin’ Wolf, Jimmy Reed, Freddie King, Jr. Wells & Buddy Guy, Peter Green, Robert Johnson and William Bell to name a few.  In the spring of 2015 Colin wrapped up his Hearts on Fire tour.  After a couple of months of straight touring, Colin was loving playing with the band and really happy with the sound they had created on stage.  What better time to make a record?  Especially the record Colin had been itching to make for years – a collection of some of his favourite blues tracks.  In less than a week Colin and his touring band went into The Warehouse Studios in Vancouver and in just 2 days, Blue Highways was born.

Fabulous singer/songwriter Donovan Woods – has just released an EP called
THEY ARE GOING AWAY
WATCH THE VIDEO FOR “WHAT THEY MEAN” VIA POP MATTERS HERE
NOMINATED FOR TWO CANADIAN FOLK MUSIC AWARDS
On tour now  with Joey Landreth   – Tonight in Canmore, Alberta

Donovan Woods has released  They Are Going Away, the follow up EP to his Polaris Music Prize long-listed album, Hard Settle, Ain’t Troubled. And to celebrate, Woods is revealing the new lyric video for EP track “What They Mean” via Pop Matters. Woods wrote the song with Charles Kelley (Lady Antebellum) and songwriter Abe Stoklasa.
WATCH THE LYRIC VIDEO FOR “WHAT THEY MEAN” VIA POP MATTERS

Donovan Woods’ acclaimed fourth album, Hard Settle, Ain’t Troubled, was just recently nominated for two Canadian Folk Music Awards for Contemporary Album Of The Year and English Songwriter Of The Year. However, the songwriting sessions had a few tracks that didn’t make the full LP, but just couldn’t stay on the cutting room floor either. And as such, Woods is releasing those tracks They Are Going Away.

Donavan Woods, who is an exceptional acoustic guitarist in his own right, says these songs didn’t make the track listing for Hard Settle, Ain’t Troubled because he didn’t want to rush the lyrics or force them to be finished. A fourth selection, “Empty Rooms” is about moving on from a relationship — when that’s not such a bad thing. Although it’s new, Woods felt it was a comfortable fit.
LISTEN TO AND SHARE “DROVE THROUGH TOWN” HERE
LISTEN TO AND SHARE “IT’LL WORK ITSELF OUT” HERE
With the release of Hard Settle, Ain’t Troubled, the critics chimed in immediately. The Globe And Mail called it “a gentle, honest collection of melancholic observations and hushed tunefulness,” while NOW Magazine claimed the album was full of “wistful songs that tug at the heartstrings of anyone who’s had feelings about partners, ex-partners, where you’re from, where you shouldn’t have gone.”
After a cross-Canada tour earlier this year with Matt Andersen and festival and club appearances all over North America, Donovan Woods is preparing to head back out on the road for a run of Canadian headline dates. Joining him will be Joey Landreth from the JUNO-Award winning band The Bros. Landreth. The tour began October 13 and all dates are listed below.
WATCH “THEY DON’T MAKE ANYTHING IN THAT TOWN” HERE

Much Music in the 70’s and 80’s was a place of magic, where anything could happen and DID happen.
For Example…
I was able to convince my fellow West coaster Colin James to sit in with Jeff Healey to riff on a couple tunes.
BUT…if they worked my name into the lyrics they got 5 bucks EACH!
This is fine music with a great vibe. I treasure it.
Enjoy!
-TDM

For his 16th studio album, Hearts On Fire, Colin James wanted to try something different.
“Making this record with my good friend Colin Linden and such a fantastic veteran rhythm section was an amazing experience,” “I loved working with the team that Colin Linden assembled for me in Nashville,” says James. “George Receli is the longtime drummer from Bob Dylan’s road band and Willie Weeks, the legendary bass player, who’s playing with Donny Hathaway I loved and Reese Wynans, the B3 and piano man of countless sessions.”

Colin and I talk about his long time friendship with Colin Linden.  (James was 13. Linden 16)
Colin also talks about why he wanted this release to have more down tempo/heartfelt songs..exactly the kind of song he loves live on stage.
Also reveals the lp should have perhaps been released before the 25 Live release.
Many of the songs co-written with Tom Wilson from Blackie and the Rodeo Kings
Colin James is an inductee in the Canadian Music Hall Of Fame. He has won six Juno Awards including “Male Vocalist of the Year” and the “Best Producer” award for his efforts with The Little Big Band.  He is the recipient of 17 Maple Blues Awards having most recently been honored in 2013 with “Entertainer of the Year”.

This Saturday Hour One

Alan Doyle checks in about their compilation album XX. Celebrating 20 years of making music and representing the Maritimes and Canada.
They’ll be sliding though Calgary and Edmonton next week – March 12/13 The Jube Edmonton
And March 14/15 The Jube in Calgary.
In the second hour Colin James walks right into the Stewdio and speaks into the microphone.
He’s celebrating so many good things.
He releases is first ever LIVE LP called Twenty-Five Live on March 19.
He gets inducted into the Canadian Music Hall of Fame during Canadian Music Week. March 21
He’s a 6 time Juno winner. Will attend the Junos in his hometown of Regina.
17 Maple Blues Awards, including this year’s Entertainer of the Year.
Colin talks openly about his partnership with Stevie Ray Vaughn, who gave him his first break.
And about his time he spend on the streets busking to make ends meet.
In two weeks we talk to
James Hunter
And
Hawksley Workman